My mind is just beginning to think about blueberries. It’s that blueberry time of year again. Blueberry jam. Blueberry pancakes. Blueberries eaten by the handful.

For a small blueberry farm in Rockport, Maine, however, the season has just ended.

Beech Hill Preserve is an organic wild blueberry farm managed by the Coastal Mountains Land Trust. Although it is situated on a hill, with reputedly lovely views of the coastline, the fields were heavily enshrouded in mist and rain on the day that I visited, and nary a lighthouse nor a seagull were seen.

I made the trek to Rockport at the invitation of Brianne, who has been spending her summer as an intern with the land trust.

She took me through all of the steps involved in blueberry harvesting, from picking berries in the field with a ‘rake,’ to winnowing and packaging the berries into quart- and ten pound-sized containers. It’s a fascinating process (with a $10k piece of equipment!) that illustrates how foraging can easily be ramped up to a commercial production level. 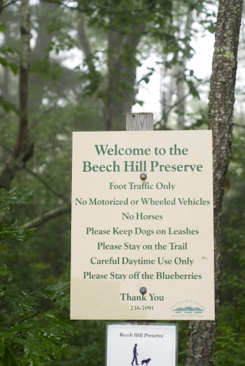 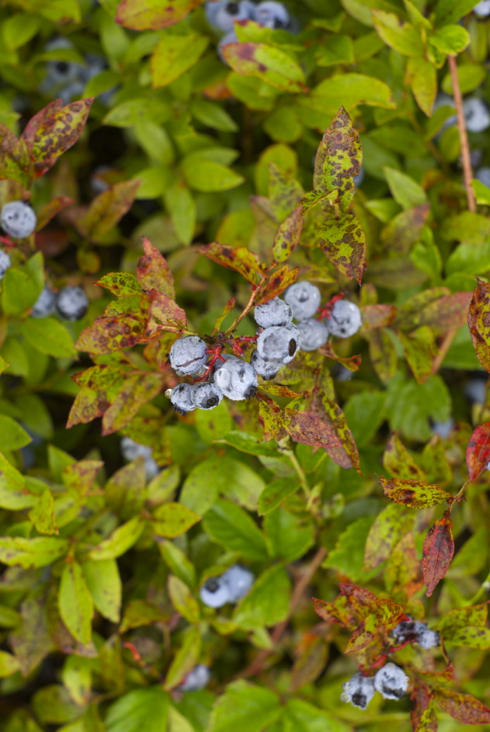 With the commercial season coming to a close, I returned home with a box of too-small-to-market berries (shown above top left), as well as a box of plumper fruit, some of which I raked myself. Now, I’m in the midst of freezing cookie sheet after cookie sheet of berries, and I’ve been dreaming up all of the ways I’ll enjoy this fruit in the months to come.

On Sunday, in between reading a tragically-long novel, I made Blueberry Mallow Doodles, which have been a huge hit. And today, I have an easy recipe for something that recently caught my eye (thanks Jenna!). I have been so excited to try making this. Are you ready?

Pickled Blueberries! Oh. You knew that was coming, didn’t you? 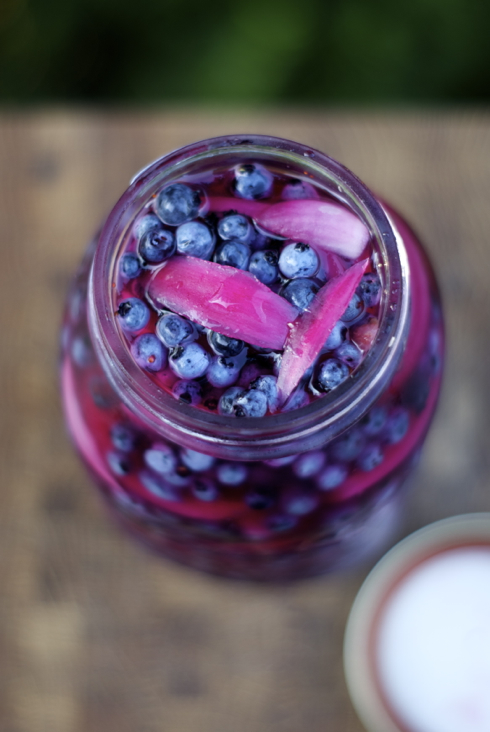 This recipe, published on Saveur last year, is credited to Chef Tyler Kord of No. 7 Sub in New York City. Like any quick pickling recipe, it’s just a base of vinegar, salt, and sugar. Add blueberries and some red onion, and you have a colorful hors d’oeuvre that could be served on a sandwich, or with crackers and cheese. I’m willing to bet it would also go very well with pickled herring.

I’ve played with the recipe a bit. I’ve altered it to fill a quart jar, used half white vinegar and half apple cider vinegar, and changed the ratios to use less onion and less sugar than were originally called for.

And I’m impressed. Chances are, if you knock on my door anytime in the coming week, you might catch me sneaking a spoonful of this stuff straight from the fridge. “It’s just so…. pretty!” I will explain to you in a red-cheeked, conciliatory manner. 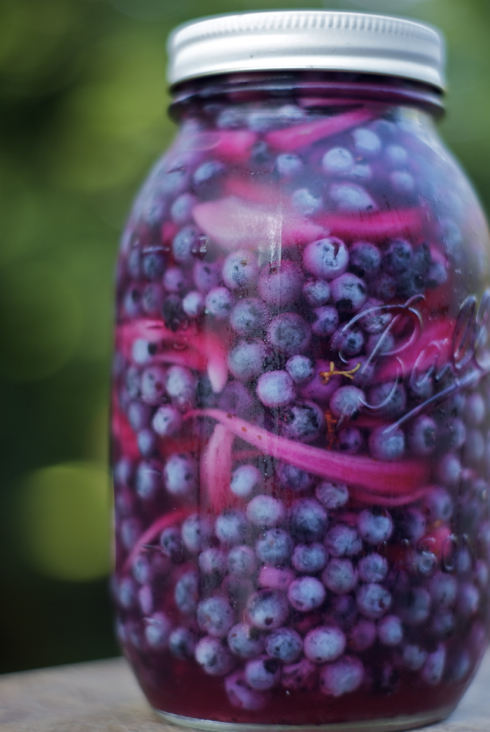 In a medium bowl, whisk sugar and salt with vinegars until dissolved. In a quart glass jar, add blueberries and red onion slices (use closer to 1/2 of an onion if you are looking for a more onion-y end product). Top with pickling mixture. Cap the jar, and let sit in the refrigerator for at least one day.

Serve with crackers and cheese, or pickled herring, or on a sandwich (Chef Kord uses these blueberries on a sandwich of brie, pistachios, and chervil).

Located approximately 1.5 miles from the village of Rockport, between Routes 1, 17 and 90
Rockport, Maine

More information on their blueberries