fresh tires on the mom mobile today. thanks @oneononebike and eli! #mybikeinfrontofthings #cybin
i was deeply saddened to hear that the world recently lost dave kittredge, who was hands down the friendliest face in forestry. he brought out the best in others, was appreciative of all views and opinions, and seemed to truly value time with students. he seamlessly bridged the gap between disparate forestry disciplines. i believe the last time we spoke in person, we were sharing a beer when i learned the super important news that zayn had left one direction. and of course dave had a nice word to say about something so trivial, because he was a good and kind human with a heart of gold. i wish i had known him better, but i knew him enough to be inspired. should you feel like pouring one out for dave, please join me in my favorite drinking game of 2010 (from the weekend this picture was taken), which eli and i brought back in memoriam last night - “i love dave kittredge because ______.” fill in the blank, take a drink, and remember one of the greats. #forestry #facesofforestry
working from home while providing full time childcare is a struggle. i’m thankful for a job that is flexible for me and my needs, because it allows me to then be thankful for what matters most - this sweet kiddo. i’m overjoyed to be back by her side, which i have so missed the past few months. shoutout to those of you balancing work at home + kids at home + all that other stuff we don’t have time for aka life.
relaxing moments from me to you. based on my current poison oak problems, turns out california is only 98% paradise.
yard plants and escaped yard plants in coastal california. i have plenty of thoughts on invasive species, but the only one i’ll share is that my mum loves calla lilies (last photo), so i climbed into a seaside cliff ditch to grab a picture for her, and was rewarded with a hidden trash midden with old bottles and a bathtub.
last week i had the privilege of a) joining @niice_cardigan on b) an amazing gravel route she created through the redwoods c) while riding a juliana quincy d) that was freaking awesome e) all without seeing anyone else for over four hours. by far one of the best rides of my life. #gojuliana #julianaquincy #roadslikecheese #roadswithsteez

Once upon a time 1.5 moons ago, I picked a generous amount of newly-grown spruce tips while camping at Cobscook Bay State Park in Downeast Maine.

Frequently, the regenerating forest along the coast is a mixture of spruce and fir that exhibits stunted growth due to both soil conditions and the harsh climate that comes with the territory. Stunted growth, as far as I am concerned, means stouter twigs within reach of my sticky foraging fingers.

Stouter twigs means – to an optimist – more volume for less work. It’s hard to tell now that they’ve dried, but these twigs were once juicily stout. I promise. 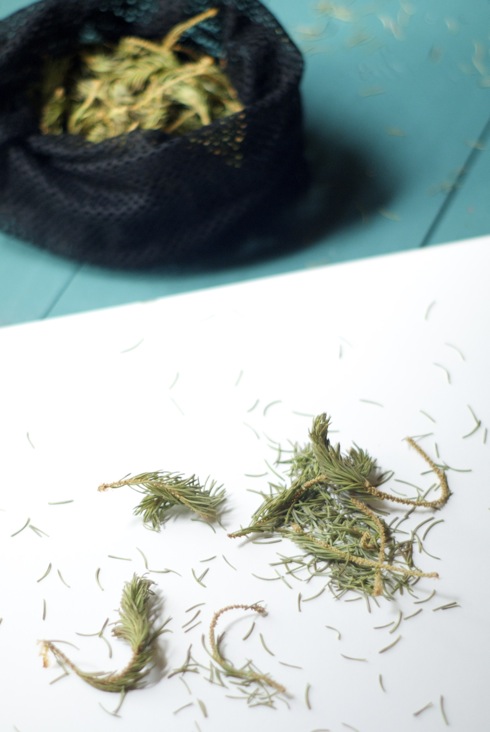 I let my needles dry undisturbed for a goodly amount of time in a mesh bag. They don’t require 1.5 moons to dry, but I have been a busy bee as of late – more to come on that as my New Venture saga unfolds.

When dry, all twigs and any paper chaff (from buds) should be separated, and discarded. The remaining needles carry a lovely scent, and can be used in anything from aromatherapy, to the shortbread that I’m about to discuss here.

I’ve talked about shortbread on this blog so many times that it may make you frown. Which is unfortunate, because shortbread is delicious and can be made in countless wonderful ways.

For this version, I decided to amp up the savory nature of spruce needles – which have an aroma and flavor unlike anything else – by pairing them with cornmeal. “Adding cornmeal to stuff” is an endeavor that I enjoy as much as my “I like shortbread” hobby. Pancakes. Waffles. Pasta. Bedazzled jean jackets. Everything goes better with cornmeal.

Despite the savory inclination of these cookies, the end-product is still sweet. And a little bit mind-boggling. And, most importantly, good.

It’s hard to go wrong with shortbread. If anything, this is what I’m here to prove to you.

In a spice grinder or mortar and pestle (of which I have neither, resulting in spruce needles that were a wee bit oversized), grind/crush the needles with the sugar. Pour mixture into a medium bowl, adding the butter, almond extract and salt, and mix/beat until well-mixed.

Add the flour and cornmeal, and mix until just combined.

On a sheet of wax paper, shape dough into a roughly 1 1/2 inch (4 cm) log. Roll to an even thickness throughout, wrap, and freeze 1 hour.

Preheat oven to 350 F. Cut log into 1/2-inch sections. Dough will be somewhat crumbly due to the cornmeal – press loose pieces back onto cut sections. Place cookies on a baking stone or cookie sheet covered with parchment paper, and bake 12-15 minutes, until lightly golden around the edges, and slightly firm in the center.

Allow to cool on the sheet for five to ten minutes, before moving to a cooling rack. Keep, in a wrapped container, for several days at most.

What else is new? I’ve been playing this song a lot lately. The Corrs were my absolute favorite thing to listen to back in the late 90s and early 2000s. One of my first CDs was their first CD. They were the first concert that I went to – sure, Barenaked Ladies were headlining, but…. I don’t really have much to say about them.

The Corrs make great pop music, and have an impressive arsenal of Irish traditionals. Also impressive is that many of their music videos feature the only male member of the group singing along heartily during the chorus, and yet, I can’t pick his voice out in any of the songs. He must be enthusiastically quiet.

I’ve been listening to this song to remind myself that this New Venture saga that I’ve set out upon – this concept that could so easily fail big time – is just the next step in my life. And I am still So Young – – relatively speaking.