If there’s one thing I can’t ever eat my fill of, it’s sugar. Oops, no, we talk about that all the time. What I meant to say, was pasta. Chewy, wonderful, homemade pasta. It is my absolute favorite.

Long long ago last month, back when there was still snow on the ground, I caught myself salivating at the thought of foraging for fiddlehead ferns. Well, now is the time, and there is no time like the present. Haste makes for good eating. And other such foodie proverbs.

I had the genius idea to stuff homemade pasta with garlic-buttered fiddleheads as I was on Mile 265 (approximately) of snowshoeing for the winter. Now snowshoeing is but a distant memory, as is this pasta dish. Thank goodness I still have tons of fiddleheads frozen from last year…

The past few weeks have been weeks of big change. I am trying out contacts for the first time. Ever. I am subsequently trying to push glasses up on my glasses-less nose about fifteen times per day. I just tried to do exactly that, thinking I’d act a bit facetious and then, oh so humorously, tell you about it. Turns out I actually am wearing glasses today. Moving on.

I got an iPhone. Dude, how long have I been waiting to Instagram my life away? About five weeks. I lie, it’s more like five months. Or a year. Or more. Moving on.

I decided that wiling away my evening hours reading a 1987 romance novel entitled “Strictly Business” was a good idea. Turns out when you’re a 1987 romance novel, you settle for one (1) passionate stolen/unwanted kiss, and a marriage proposal. After the Strictly Business debacle, I decided to stick with my modus operandi and read 1967’s “Episode in Rome,” by the forgotten Teri Lester. Part of an enticing Double Romance(!), the first sign of trouble was when the words Strictly business appeared on page 7. Not to be deterred, I finished the story off in a few hours, again settling for a kiss (this time on the forehead) and a marriage proposal. I wish I could say I won’t, but I’ll probably dig into “Sylvia’s Daughter” once I finish up with this post.

Had I found more nettles, I would have incorporated them into the pasta dough as well, because nettle pasta is tasty. But since they were only starting to shoot up last weekend, I found just enough to make a pesto.

Yes, by nettles I mean stinging nettles, those awful plants that make your skin itch if you touch them. When young, they can be picked and eaten no problem, and they are quite tasty. Just be sure to wear gloves while harvesting, and to blanch them before eating.

Fiddlehead Fern Tortellini with Nettle Pesto {recipe by myself}

In a large frying pan, melt butter over low medium heat. When hot, add garlic and fiddleheads. Cook, stirring and flipping occasionally, ten to fifteen minutes. Set aside to cool. Note: some sources recommend blanching fiddleheads prior to sauteeing them, for safety’s sake. Do this if you are concerned about food safety (especially if you purchased fiddleheads rather than foraged for them).

In a large bowl, combine flours. Make a small well, cracking into it the 2 eggs, and adding the olive oil and salt. Mix by hand until the mixture comes together. Turn out onto a lightly-floured surface, and knead for five to ten minutes, until dough is smooth. If the dough is too dry, add a small amount of extra oil. If the dough is too moist, add some more all-purpose flour – depending on the day’s temperature and humidity, I have to alter my ingredient proportions slightly.

Let dough rest in the bowl, covered, for one hour. On a clean countertop, roll out a quarter of the dough at a time. Roll dough as thinly as possible (this is difficult). Alternately, use a pasta machine if you have one to roll your dough out extra thin (if you do this, you may need to cook an extra 2 c. fiddleheads or more). Using a 2 1/2″ biscuit cutter or glass, cut out dough rounds.

Not possessing a pasta machine, I gave each dough round a final roll with the rolling pin. Fill dough rounds with two to three fiddleheads, depending on size. Flip top half of dough over bottom half, and press to seal. Bring corners together, one over the other, and seal tightly. Repeat with remaining dough rounds, and with remaining quarters of dough, meanwhile bringing a salted pot of water to the boil.

Boil tortellini for two to three minutes – it won’t take long to cook the dough.

In a pot of boiling water, briefly blanch nettle leaves (no longer than 4-5 minutes). Set aside to drain and cool. Combine all ingredients except salt in a food processor, and pulse until homogenized. Add additional oil if mixture is too dry. Add salt to taste. 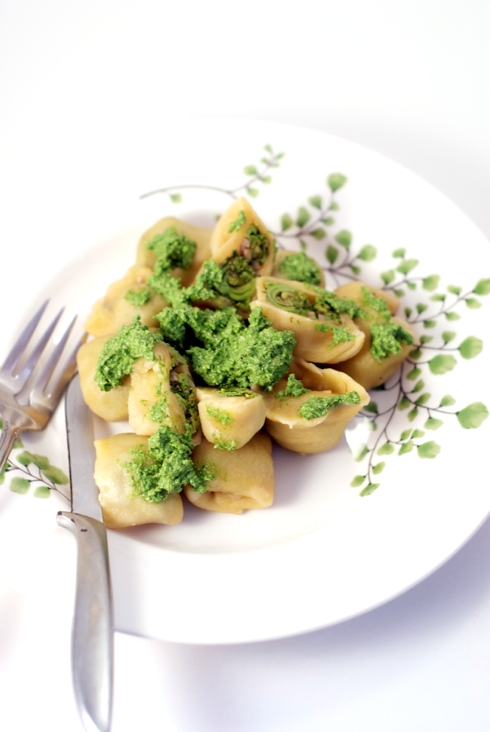