my three year old is cooler than me 🙌
yesterday i picked up my new @julianabicycles roubion. this bike means a lot, and it represents how far i’ve come since a year ago, when i borderline couldn’t pay my bills and was trying to provide my kid healthy and varied meals on my very limited budget. i chose to forgo steady income for as long as i could so that i could be at home with my little girl, and i have no regrets, but it was as worrisome as it was rewarding. the bike pictured here was my demo in march that convinced me that this was the new hoss for my stable. saddle up, yeehaw, let’s ride! special thanks to @oneononebike for the bike and the build and @elitheshank for letting me be so selfish 💙 #mtb #gojuliana #getsome #julianaroubion
there’s no such thing as bad weather. oh wait, yes there is... and for some reason i love riding when the weather is miserable - at least until my hands go numb. #mybikeinfrontofthings #qzar
one and done, but for my first morel in over a decade, i’ll take it. as juni would say, “yeah buddy!”
fresh catch of the day, just in time for the fishing opener. thanks for reeling in the big one, mom mobile! #mybikeinfrontofthings #dehse #fishmn
no one else i’d rather dirtbag with. from breakfast s’mores to unexpected moments on 65-mph roads, happy birthday and thanks for another year of #souvenirsbetweenyourears

I kicked the crap out of my fellow wizards on Pottermore for at least five hours during a sick day. As a unique individual prone to bouts of oddness (so says Pottermore), I was a clear pick for Ravenclaw. Luna would be so proud of me, if only because I deleted my initial boring Pottermore username to create a new one that mentioned those cute li’l treasure-seeking Nifflers.

I worked on catching up with Gossip Girl. Enough said.

I collected logs for a special project I’ll talk about here sometime. I spotted the first flower of the year, a Pulmonaria, in my yard. And I caught my cat in two cute places: on top of a new/used sofa that has yet to be un-verticaled, and next to my favorite on-display Barry Manilow playing card. 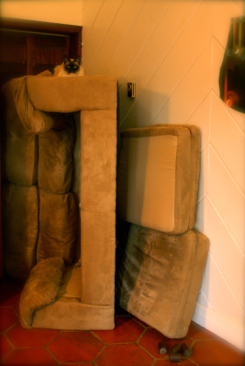 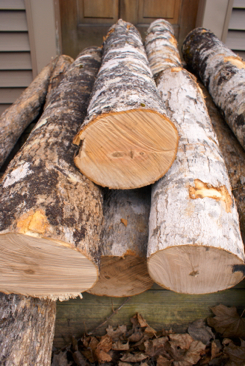 I also racked my brain [trying to explain, all the things that you do to me – bei mir mist du schön, you’ve heard it all before but let me try to explain] as to how to use some ‘Malted Milk Crisp’ topping that we purchased impulsively when hungry. I think the recipe I’ve come up with here is the answer.

Toasted walnuts, malt powder, and some single malt Scotch were added to a no-brainer blondie recipe. I decided to throw the Scotch in because it had malt in its name, too. Well, sort of – actually, both the powder and the Scotch are made out of malted barley, so it is an appropriate pairing.

I topped the blondies with a melted TCHO chocolate bar that had been mixed with a bit of milk, and followed that with a sprinkling of the malted milk crisp topping that started this whole affair. 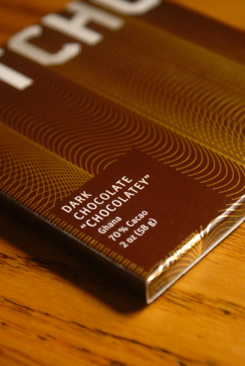 Makes 16. Best served with a cold glass of malted milk.

Transfer to the prepared pan and smooth out. Bake for 20-30 minutes, depending on how well-cooked you prefer your blondies to be. With a few minutes’ baking time left, melt chocolate and mix in several splashes of milk. Remove blondies from oven, and cut into 16 squares. Spread with melted chocolate, and top with malted milk crisp topping (or crushed malted milk balls, if you have them).

Chill in fridge until chocolate is set. Re-cut, and transfer to serving plate.

By the way, I was working my way through a 42-song list of Spice Girls videos while writing this post. Sure enough, when Mama came on, my eyes were soon brimming with emotion. Hormones, I’m onto you. You’re unique and prone to bouts of oddness.

Anyway, you’ll enjoy the video if you’re a girl and you like 90’s music. Otherwise… check back next time.