Last week I had the terrific fortune of visiting Manchester, New Hampshire, with the sole intent of stopping in to Dancing Lion Chocolate. A welcoming chocolate shop located in the downtown area, Dancing Lion is a sparkling gem that is run by the exuberant Master Chocolatier Richard Tango-Lowy and his team of friendly employees. The shop opened in November of last year, and has since received numerous media accolades.

I sat down (and stood up) with Richard, and talked shop over a hot bowl of Tikal drinking chocolate made from Vietnamese and Caribbean cacao beans, and flavored with vanilla and masa. Later, I took home some of his artisan creations – emphasis on art – and spent some time savoring their exquisite beauty, as well as their commendable taste. 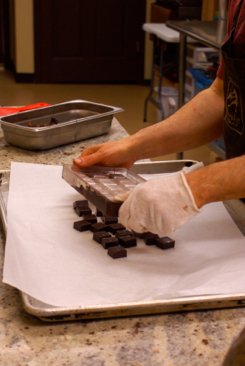 In his shop, Tango-Lowy is the definition of enthusiastic. Whether describing his shop’s plans ten years down the line, explaining the poetry he creates for each piece of chocolate, demonstrating a giant air gun filled with cocoa butter that he witnessed while taking a master class in Tuscany, or expressing how his fascination with molecular chemistry guides product development, he is more energized by fine chocolate than anyone I have ever met.

Interestingly, Dancing Lion never makes the same bonbon twice. This begins to make sense to me as I listen to Tango-Lowy describe his shop’s constant innovation, and dedication to the product. It begins with the chocolate, of course: for example, Tango-Lowy has worked closely with Alan McClure of Patric Chocolate to create three custom blends, based on his desire for calculated flavor profiles. After choosing the chocolate, he chooses flavor pairings, bringing out subtle notes in the chocolate, whilst imbuing additional character.

Although reviews of his chocolate will serve to make readers jealous, given that these delicacies will never be made again, they will also offer insight into the style of chocolate art that is Dancing Lion. 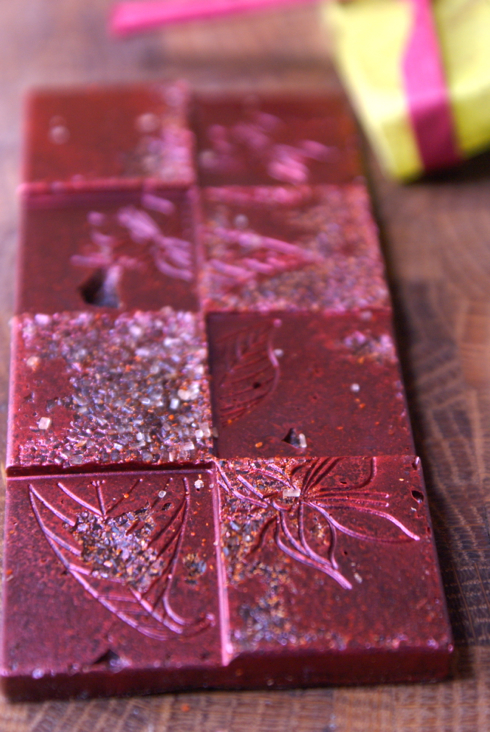 Dancing Lion has a line of Signature Bars which are all as breathtaking as the one featured above. This particular bar, labeled 451, contains vanilla and cayenne, and is generously sprinkled with coarse sugar. The spice plays nicely with the dark chocolate, which is fudgy and bold, but still sweet.

This bar isn’t for the faint of heart, however, given its predominance of super spice. I am making the not-terribly drastic guess that this bar is named after Fahrenheit 451 – spicy burning mouth sensation, pretty fire-like color… burning of books, mechanical hounds, exiled book-lovers… you get the gist. 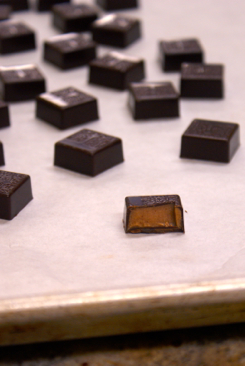 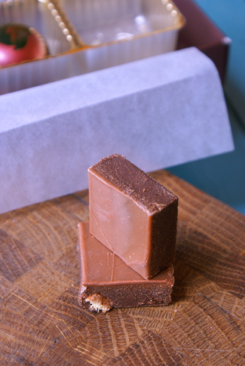 Minarets (shown above bottom left) are a combination of mango syrup, crystallized ginger and mango, almond paste, and ginger honey wine from Moonlight Meadery, all combined with 72% Vietnamese cacao and topped with Valrhona Tanariva 33% milk chocolate of Madagascar origin. They are sparkly and fudgy, and represent what I imagine ginger to be capable of accomplishing (but hitherto had never experienced). The chocolate is smoothly unctuous, with undertones of caramel highlighted by the almond paste.

Bernal’s Tears (spheres with colorful exteriors as shown above) are made with Los Ujuxtes 60% dark cacao from Danta Chocolate in Guatemala. The interior is a praliné of pecans and maple syrup that were cooked with jalapeños for added heat. Perhaps my interest in upping my spice tolerance has succeeded marvelously, for despite a noticeable burst of heat, I didn’t find this praliné to be as spicy as described. The interior, almost mousse-like in appearance, was a fantastic way to pair pecans and maple syrup with the soft but intense Danta chocolate.

Belize (square truffle with ganache interior as shown above) is the creation of Tango-Lowy’s apprentice chocolatier Laura, who recently returned from the country Belize and sought to recreate the flavors of Belize with the truffle Belize. Tanariva 33% is this time paired with rum, allspice, chilis and masa (corn), and enrobed in Vietnamese 72% dark. The dark chocolate flavor prevails, but is effectively balanced by the milky corn taste of the ganache. I would like to taste a bit more spice (either allspice or chili), as it is not overtly discernible. 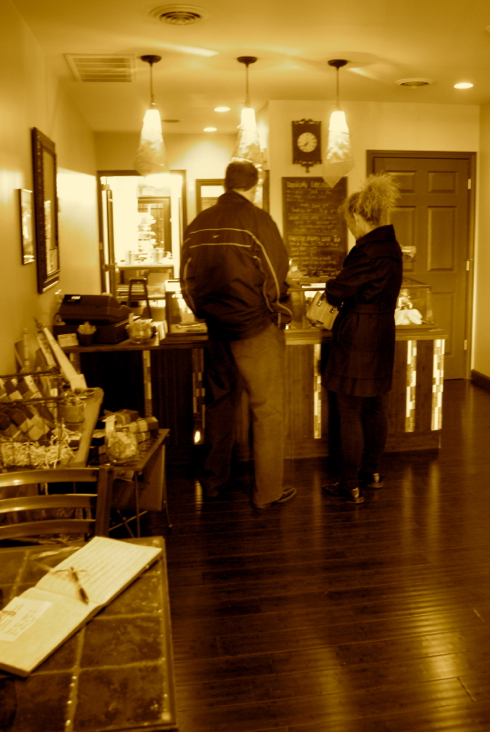 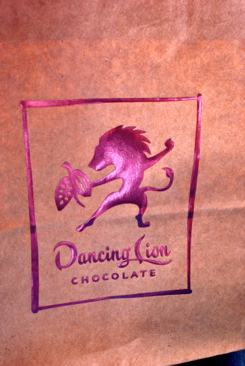 Additional products available include chocolate lollies, marshmallows, biscotti, croissants, espresso, tea, and drinking chocolate. I sampled both the violet and Lebanese blackberry marshmallows, and while the blackberry marshmallows were understated and incredibly delicious, I found the violet marshmallows to be a trifle strong – after eating lunch, I could still taste the marshmallow I had eaten an hour previous. Perhaps the most surprising and impressive product I tasted were the biscotti, which at the time of my visit were flecked with the cheery exotic citrus fruit yuzu.

Finally, Dancing Lion creates seasonal products. For Easter, Tango-Lowy sculpted and painted unique chocolate eggs, each filled with small chocolate hearts. The woman in the photo above came into the shop to claim her egg during my visit, and was clearly quite pleased with its beauty.

In fact, everyone who visited seemed quite pleased; those I met left in good spirits, with smiles and fond pleasantries. “I was dreaming of this today,” customer S. declared over her cup of hot chocolate.

And now that I have experienced Dancing Lion, I can say with certainty that I am dreaming of it, too.

42 thoughts on “a visit to dancing lion chocolate in manchester, new hampshire”